About Martin, By Brandon

Martin is a tsundere. He'll beat you up and call you names, but he likes you at the end of the day. He isn't the smartest cat, but he knows what he wants. If he meows at you and rubs on your leg, he might want something or he might want to say hi. Follow him for a while and he'll usually show you what he wants. Be warned, sometimes he just wants to beat you up because he's realized that he likes you too much for your own good.

If he gets in your way, you can make stomping noises to startle him or you can pick him up and carry him over your shoulder. Be sure to support his hind legs as well since most cats get a bit irate if they don't have contact with their hind legs.

About MAG Cat, By MAG Cat 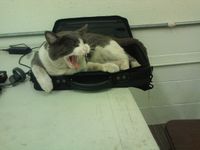 Be warned! MAG Cat is known to commandeer unattended baggage for his cat-ly business.

Martin lost his tail due to complications following a probable animal bite. He was more or less confined to the inside of the space for a timespan of at least six months. However, due to an infection as well as Martin repeatedly ripping off the bandage, his tail ended up completely amputated.